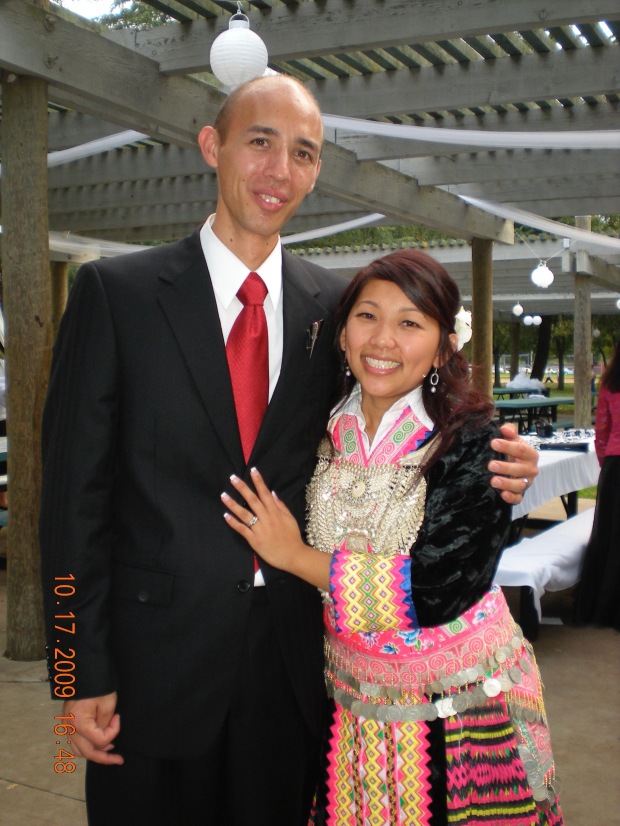 My first encounter with this word was when I was standing in line at my local bank in Florin Rd, cashing my very first paycheck since moving to Sacramento, California. The guy behind me gave me a sly smile and asked me if I was Hmong. Hmong? I had no clue what he meant and said, “No.”

My second encounter with the word was during training at my then new job. We were given scenarios and the word Hmong was written on the booklet. Again…I had no clue what it meant, but from the context, I gathered that it was an ethnicity or a nationality.

So I went home to my aunt and uncle’s house…and I asked them, “what is Hmong?” And they just flat out laughed at me. Some help they were. They were very unclear on describing it to me, but basically said they are short people, like myself , that moved to Sacramento from Vietnam and other places, because they didn’t have their own country.

Thankfully, a year or so later, I met Ka, who is Hmong. She worked at the same building as I did. We became fast friends and she enlightened me with her culture and her language. I asked her a few questions a few months ago, for this blog post, and these are her replies:

S: What is Hmong?

K: Hmong are a people without a country. After the Secret War ended, hundreds of thousands were accepted as refugees to America, France and Australia, just to name a few countries.

She then quoted a website called: ethonologue.org that states millions are still living in Southern China.

S: How would you describe the culture?

K: It’s a culture that cherishes family and heritage. They are a people who resist assimilation and yet are pleasant, amicable and humble.

S: Where did your ancestors come from?

S: How would you describe the language?

S: How would you compare an ancient Hmong to a modern day Hmong?

K: The Hmong in America seem to have influence over the world wide Hmong populous. Through entertainment, internet and social media they connect to the rest of the Hmong around the globe and are changing the way those ones think and see the world around them. Most of those changes seem to be for the worse and not the better. Many are getting divorced, having extramarital affairs and children out of wedlock. Things which, just a few years ago, would have been unheard of. There are some parts of the world where the Hmong have not been ‘contaminated’ with this modern age, and they live quiet and humble lives; probably like the ancient Hmong.

I had the pleasure of attending a Hmong meeting once before…and was very lost. However, I did appreciate the enthusiasm that many learners put into the learning the language. At that time, they were studying the My book of bible stories for their Congregation Bible Study. They were limited in the books they can use since not a lot of the publications were translated in Hmong. Also, their songbook had less pages compared to our regular song book. Now, they have the Remote Translation Office for Hmong in South Sacramento, and Ka is currently one of the translators there.

How glad I am to come to know a new culture, a new person, and a new language… that shows Jehovah definitely does not discriminate nor hold back any of His blessings.

This site uses Akismet to reduce spam. Learn how your comment data is processed.